Voltage Inc Wiki
Register
Don't have an account?
Sign In
Advertisement
in: Complete, Games, 10 Days with My Devil,
and 8 more

In Love with the Devil for 10 Days

10 Days with My Devil is an otome game by Voltage Inc. You are to destined to die but you fall into a forbidden love with a demon or an angel.

A former standalone app which has been moved to Love 365: Find Your Story. 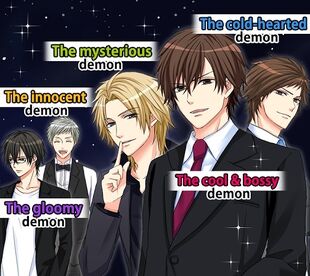 The game starts out with you meeting the demons in disguise throughout the day. On your way back home, a dog keeps you from going back to your room, and thus saves you from an explosion that was supposed to kill you. The demons you met before then confront you, explaining about your would-be death and how your soul was to be sent to Heaven. After recovering from your initial disbelief, you subsequently plead for an extension of 10 more days to live, to which they agree on the condition that you stay with them and initiate a contract with one of the demons for the sake of your protection.