After School Affairs is an otome game by Voltage Inc. You are a teacher of a school where love is prohibited to students and teachers, but you end up falling in love with one of your coworkers.

It is available on iTunes and Andriod.

You are a teacher at an all boys school when suddenly your school is in a financial crisis and merges with an all girls school, becoming a co-institutional school. The principal of the new school prohibits love among the students and the teachers are to follow this example as well. 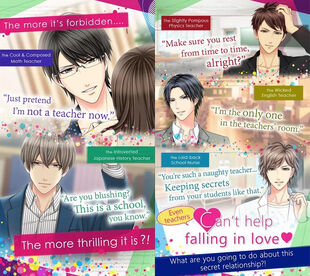 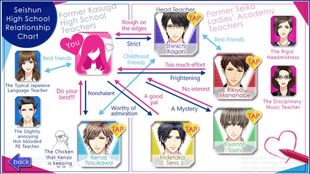 Note: Characters in bold are only available in the Japanese version and have yet to be translated.

Retrieved from "https://voltage-inc.fandom.com/wiki/After_School_Affairs?oldid=49669"
Community content is available under CC-BY-SA unless otherwise noted.