Be My Princess is an otome game by Voltage Inc. You fall in love with a prince and establish an inter-class romance with royalty.

It is available on Android and iPhone.

You are currently an exchange student at Charles Kingdom and have helped out a noble elderly man, though you don't know it yet. Bumping into a prince at a flower shop he invites you to a party where all the princes will be attending, there your love story begins! 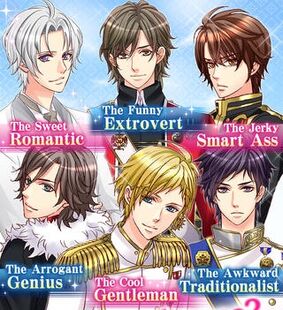 The story begins while you are taking a stroll in Charles Kingdom as an exchange student there. As you walk you notice an elderly man had fallen and precede to help him. His personal butler then comes to his aid but before the elderly man leaves, he hands you his number and tells you to call him should you need any help.

You continue your stroll and it begins to rain, you find shelter in a flower shop. While looking at the flowers a man approaches you and compliments on your beauty, however you do not realize that this man is Prince Edward.

Then, behind the gentleman were several expensive looking cars that were speeding down the road and one of them almost splashed water onto the prince but that was avoided because you jumped in front of him to shield him. In order to apologize for getting you clothes wet, the prince invites you to the party being held at the grand castle of Nobel Michel.

There, you meet the six princes and the prince that is chosen will be your dance partner and your story begins.

Bold means that the character's route has yet to be translated.

Retrieved from "https://voltage-inc.fandom.com/wiki/Be_My_Princess/Novel?oldid=50121"
Community content is available under CC-BY-SA unless otherwise noted.