Kissed by the Baddest Bidder

Takahiro Sakurai (CM)
Takayuki Kondo (Substory, Love Scramble)
Eisuke Ichinomiya is a selectable bidder from Kissed by the Baddest Bidder. He is the owner of the Tres Spades Hotel and also one of Japan's top corporations, the Ichinomiya Group.

Eisuke and his younger sister were born into a very old and prestigious family in Japan. When he was seven, his father was tricked by someone from a rival family and became bankrupt. After this event, his mother's health was failing and then shortly died, and his father abandoned both Eisuke and his sister. Both of the children were adopted by different families; Eisuke went to live with his father's benefactor Akira Ichinomiya in England, and he never knew the family who adopted his sister.

He then went a very prestigious boarding school, where he met and befriended Soryu and Luke. He made enemies with the headmaster's son for they were picking on Soryu and was framed for setting fire on one of the school buildings. Luke took the blame and was expelled from the school (he had done it because Eisuke was a good friend to him) and since then, Eisuke owes Luke an immeasurable debt. After he graduated, he worked in the Ichinomiya Group and studied business and economics, learning everything about the company, so that he could began to financially repay Akira. Eventually he, inherited the Ichinomiya Group after Akira retired.

Five years ago, Japan passed a bill that allowed his hotel casino to be built. He called it the Tres Spades and spent his own money building it. Around that time, he would encounter a thief named Baba who would break into his mansion by mistake. Instead of turning him over to the police, Eisuke felt that he could use him. At Baba's suggestion, they came up with the black market auctions where it would be held in secret in the Tres Spades. He would recruit Soryu because of his mafia connections, Mamoru in order to keep the police from discovering the auctions, and Baba would bring Ota over as an appraiser.

He first used the auctions for fun as well as to make money and strengthen his underworld connections, but he also secretly wanted to find his little sister, for the only clue he had, was the burn mark on her chest. He also wanted to find his father and the man who caused his father's company to bankrupt, not for the sake of revenge but the truth.

On another regular night of the black market auctions, you happened to be put up for sale without Eisuke's knowledge (putting humans up for sale without their consent is against the rules), so he bought you for $20 million. When he learns that you aren't his sister, he thinks of a better use for you and makes you his "girlfriend" in order to turn down a mafia boss's daughter without insulting them, for he was in the middle of negotiating with the mafia boss. He wanted to use you because he didn't want you to develop feelings for him, but he ended falling for you before he knew it.

After marrying you, you and he have a ten year old son named Eito and you're currently expecting another child. 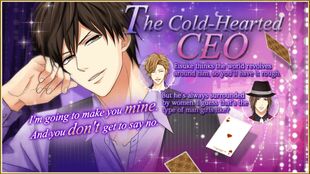 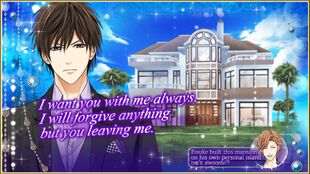 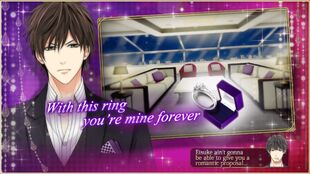 Eisuke has layered dark brown hair and light brown eyes. He is also described as having a firm and muscular body.

Eisuke is quite cold, demanding, and will never settle for anything except the best, but he's a very savvy and intelligent businessman and a good leader. His most notable traits is that he doesn't do anything without a good reason, and most of those reasons are for the benefit of others even if it hurts them. He also does not like being in debt to anyone, which was the case when Luke took the blame for him being framed at the boarding school in England.

Despite being one of the managers of the black market auctions and dealing with illegal activity, Eisuke does have a sense of morality. One of the rules of the auctions was that human trafficking was not allowed (unless the human wanted to be sold), and he and other managers paid $20 million for you since you were forced to be sold in the auction.

While it may not seem like it, Eisuke loves animals and tries to either pet/play with them or give them the best quality items [1], but they hate him and it is one of the few things that can upset him.

Eisuke also has a tendency to get jealous easily, as seen in quite a few instances. For example, in the Sub Story: Jealousy, Eisuke gets extremely jealous and protective of you when he hears about your life in high school. Even though you didn't date anyone in high school and didn't have any romantic interests, Eisuke gets extremely jealous when you start to talk about how you admired one of you teachers for his work ethic and motivation. He also got jealous of himself when he switched personalities in the Sub Story: His Heart.

After being bought by the owner of Tres Spades, you're unsure of what to make of him. He's cold, ruthless, and treats you like your property, but he'll let you go free if you be his girlfriend in order to ward off a suitor. As you spend time with him, you see that there's a kindness behind his cold exterior and you find yourself falling for him.

Life has been blissful for you since you and Eisuke became a couple, but Eisuke's groupies still hang off him much to your displeasure. Eisuke then assures that you are the only one who can satisfy him.

A month after dating Eisuke, you encounter his long lost sister. You want to bring them together at her upcoming wedding, but then Eisuke coldly rejects her.

You live with Eisuke on an extravagant island in Dubai and are slowly getting used to working in a new country, but then you find yourself in the middle of a love triangle with Shuichi Hishikura!

A priceless statue has been stolen from the hotel and you're determined to get it back for Eisuke. You discover that the statue is a prize for a billiards competition here in the hotel and try to get it back, but you end up being the prize! Can Eisuke save you?

Months have passed since you and Eisuke has dated, you and Eisuke have went to a hotel in London to see the owner, Frank Anderson. Ever since then, trouble have been knocking at your door, with Tres Spades being attacked! What will happen between you and Eisuke’s fate?

Several months after you and eisuke are engaged and are spending time in London. You decided to be his equal half, but what will happen when the M16 has targeted Eisuke for a leaked picture! Eisuke tells you, you shouldn’t be worried if you want to be his other half, but can you as trouble comes to your life?

The day has come when Eisuke finally meets your parents! For once, you could see nervousness in his eyes as he meets his future bride’s parents. Times goes on you realise how much he is willing to do for you. How will your blissful life be?