Enchanted in the Moonlight is a dating sim game from Voltage. You will be falling in love with ayakashis who are after your mysterious power that they desire.

It is available for download on iOS and Android.

You were living a normal life until on a night of a red moon, your powers awoken and now demons called ayakashi are after you. You were born with the power to amplify an ayakashi's power by either a kiss or intimacy. Five ayakashi clan heads offer to protect you but in exchange, you must bear a child with one of them who will be the next ruler in their world. 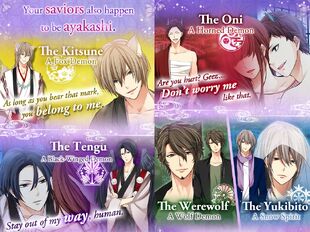 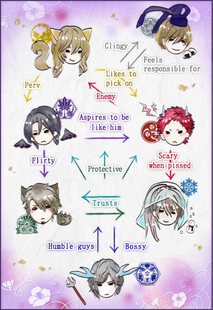 You wake up from a nightmare and you're drenched in sweat. You head out to the garden for some fresh air and when you get outside, you realize that there is a red full moon. You start to feel dizzy when a weird force pushes you upright, and two strange figures suddenly appear. The stranger's conversation confuses you, especially when they mention that you have "good blood." You wake up in your bedroom and think that what you saw was a dream. You head out towards your workplace, the library, and you talk a little with Samon, your friend who manages your family's shrine for you. Suddenly, on your way there, you trip over a black cat. Samon saves you by catching you, and you wonder how he managed to appear beside you when he was cleaning the shrine grounds just a moment ago. You thank him and head off again. All is well at work until you notice two men in the library. One is ranting on a drivel called “Momotaro" having lies, whereas the other is groaning about the wolf in “Little Red Riding Hood” and how he prefers Red Riding Hood as a sexy woman in red lingerie. Then suddenly, one of the bookshelves starts crashing down, followed by the one closer - much like a domino effect. You think that you are going to die when one of the men save you. They warn you to be careful. On your way home, you realize that there is a car spinning towards you. You shut your eyes, waiting for impact, but are greeted by the one of the men you saw in your “dream". People crowd around the car, realizing that strangely there is no driver and that the car was stopped by a large snowball. You question why there would be snow during a sunny day. Then, someone else comes and offers you his hand to help you off the ground, but his hand is freezing cold. Then, the man who you saw in your “dream" criticizes you for not being careful. When you begin to apologize to them, you think that they are dangerous- since he should not know that you were warned in the first place- and run home. You arrive home and suddenly a fox dives into your bag, eating your dinner, which is Inari sushi. You then take it into your house and decide to give it a bath. The fox, however, turns into a man from your dream. He takes you into the living room where you find the other four men that you met during the day. You learn that your blood is special, as it has the power to amplify an ayakashi's power. You also learn that many ayakashi seek your blood, which is the reason why there seemed to be danger surrounding you throughout the course of the day. The men promise that they will protect you but in exchange, you must bear a child with one of them. You are faced with the decision: who will you choose?

Retrieved from "https://voltage-inc.fandom.com/wiki/Enchanted_in_the_Moonlight?oldid=48389"
Community content is available under CC-BY-SA unless otherwise noted.