Ichigo Sato is a selectable character from the game Dreamy Days in West Tokyo. Ichigo's younger and present self is voiced by Yuki Kaji in the CM version of the Movie. 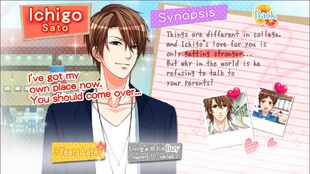 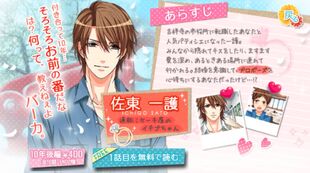 10 Years Later
Add a photo to this gallery

Ichigo is a tsundere; always teasing you and making fun of you, but deep down he really cares for you. It turns out that he has a crush on you since you guys were kids and is very protective of you. Ichigo reluctantly helps out at his family's cake shop; saying that he hates sweets because seeing and smelling them everyday. His father is rather hard on him, while his mother is kind. He does not get along with his older brother, Togo.

Ichigo can be very mean at times, but also sweet and loving at the same time. He worries about you because of the other guys are always getting too close to you, especially Rihito. He trusts Haruki to take care of you when he goes to Paris to train and become a patissier.

Retrieved from "https://voltage-inc.fandom.com/wiki/Ichigo_Sato?oldid=47305"
Community content is available under CC-BY-SA unless otherwise noted.