Voltage Inc Wiki
Register
Don't have an account?
Sign In
Advertisement
in: In Your Arms Tonight, Koichi Natsukawa, Characters,
and 5 more

Koichi Natsukawa is a selectable character from the game In Your Arms Tonight. He is your husband through an arranged marriage by both of your parents.

Koichi's father and your father were the best of friends and through their relationship they believed that you and Koichi would be a great couple. Your fathers both said that Koichi did not want to let you go when you two were just babies, there is evidence for this - a picture.

In Koichi's route, you learn more about your husband and the reason he acts so cold and distant towards you. Both of you go through the struggles of understanding each other, protecting your failing marriage and the act of truly falling in love. You will also learn where Koichi's reasoning of marriage stems from. 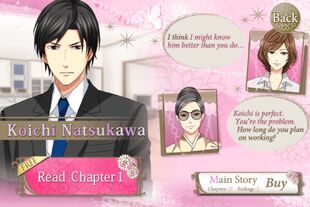 Koichi has well-kept black hair with bangs parted on his right side and black eyes.

Koichi is cold, distant and a quiet individual. He is hard working and at first appears to be a workaholic. He sees marriage as a business contract and refuses to involve himself in any part of your marriage. He makes you think that he does not care for you but in truth it is because he does not know how to love.

When he was a child, his father had an affair with another woman and instead of getting angry and confronting him, his mother let it slip, believing that the most important thing right now is to take care of Koichi. Koichi saw this and he was then stained with this belief until you came along.

Although he may seem to be heartless, however underneath all of this, he is kind, caring, sweet, has a hard time being honest and expressing himself but is surprisingly, childish at times. He complains about how "black" foods tastes vile and would not eat. Even if it is an eggplant, he refuses to eat it claiming that "it's still black" and he has great love and passion for dinosaurs. When he sees something related to dinosaurs he becomes a big kid and is very happy about, this passion of his has induced great knowledge of the extincted creatures. His caring side is when he was willing to divorce you, even though it is clear he is in love with you, because he did not want to hurt you in anymore than he already had. He is also quite stubborn, refusing to back down on the divorce for your sake.

He hates to lose and pouts if he does something unsuccessfully and he is also easily gets jealous. For example, when your co-workers threw a party for your first successful assignment, Kippei, Shohei and your ex-boyfriend, Genji congratulated you. Koichi was very irritated seeing all the men around you. Especially, when Genji gave you flowers and hinted that he was still in love you, Koichi and Genji stared at each other intensely.

Once he falls in love with you, it's hard not to catch him blushing - which he does, a lot.

Just when you reach your breaking point following a meeting with his mistress and want a divorce, he begins to change for the better, but when something is revealed that gives him a wake up call, you both finally are on the path to a loving relationship like newlyweds should be.

You and Koichi were both having a busy work load, but managed to go to Korea as a private trip with the couples they has known when he was at his previous position as a way to spend time together which pleases you.The trip went happily until you met Ai’s husband. Koichi decides to leave Korea earlier than planned as Ai’s husband asked him to. However, you asks him to stay in Korea on their own as you both haven't spent time alone together lately. You once again express that you won't leave Koichi again.

One year after the main story, you’re growing strong with Koichi. But since being demoted he works very hard to try and make up for his failure by working hard in his department. However, his co-workers aren't having it for the simple fact he cheated on you. You soon get a job to renovate Koichi's office while he's being shunned for cheating. He requests you don't tell anyone you're his wife for simple fact of his shunning. While working, you receive a picture of Koichi naked with some girl, you wonder is he up to his same tricks?

Things have going well for you both as things have calmed down and your both are in your bliss. However, things change when Koichi gets a promotion to go overseas and work. Just to make things more complicated, you find out you both are expecting. You end up renewing your vows and moving to the UK to be with Koichi with a promise to come home when the baby is born.