LOVE☆Scramble is the first puzzle game from Voltage Inc. and is currently only available in Japanese. This game features characters from various released Voltage games.

Seduced in the Sleepless City

Kissed by the Baddest Bidder

Metro PD: Close to You

Enchanted in the Moonlight

Her Love in the Force

Scandal in the Spotlight 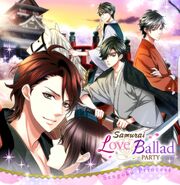 Era of Samurai: Code of Love

The story starts with an unknown man talking about how the world is corrupt and needs to be eliminated. To do so, there is a legend that says "The Seven Jewels" and a "Jewel of Maiko" are needed to complete this.

The scene changes to you walking home from work at night. You feel as if danger is lurking so you start to walk faster when suddenly a man dressed in black began appeared in front of you. The man, Will, seems to be talking to another man using a device that shows a holographic image of a man. Will tries to take you with him, but you refused and quickly ran away from him. With no other choice, Will summoned a monster to catch you. Unfortunately, you trip on a rock and fall down. As the monster was about to catch you, three men appeared and transformed into white uniforms to save you.

You wake up in what seems to be a hospital room. There, you meet Rabyi, a support monster working at Shields. Shields is an organization that is working directly under the King's order to maintain world peace. Rabyi explained that the man that tried to kidnap you was from Noir, a mysterious group that is seeking for the destruction of the world. Rabyi also explained that the three men who saved you are from the first corps of Shields. You are brought to an alternate world where Shields and Noir exists.The first chapter ends with Rabyi dragging you to meet the other members of Shields.