Mamoru Kishi is a selectable bidder from Kissed by the Baddest Bidder. He's a slacker detective who is bribed by Eisuke to keep the police from discovering the auctions.

Little is known about Mamoru's childhood, but his family owns a sake brewery. His mother has wanted him to take over the business, but he decided to become a police officer instead and his younger brother took over the business.

When he entered the academy, he befriended Shunsuke Minami who he often described as a busybody. After the two graduated, they worked in the crime divisions and Mamoru wanted to reach the rank of inspector. However that all changed when Minami was killed in an accident shortly before the sting on the cult AID. He believed that Minami had information about the criminal activities within the cult and was killed because of that, but it's much deeper for Minami had information about the corruption in the police force. Since then, he lost his passion about his job, becoming lazy and rarely going to work, but he was consumed for revenge for Minami's death. Sometime later, he would be hired by Eisuke Ichinomiya to provide police information and keep the black market auctions from getting out, and he'd also became an auction manager. He used this position in order to help him achieve his revenge.

Four years later, you accidentally get put up for auction and are bought by the auction managers. To his dismay, you chose him because he was a cop and thought you were going to be a pain, but little did he know he'll find out the truth about Minami's death and fall in love with you as well. He and you have a six year old daughter named Nodoka after your marriage. 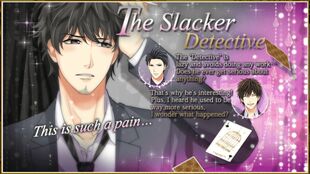 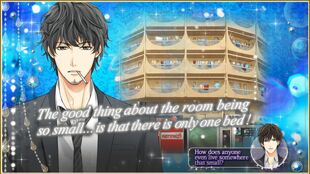 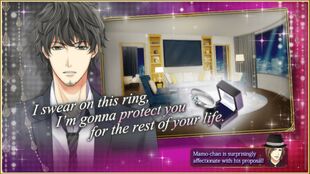 Mamoru has messy dark grey hair and eyes and a chin beard with no mustache. He's always seen with a cigarette hanging from his mouth.

Mamoru is a lazy detective who is always sleeping instead of working. Despite him being an irresponsible adult. He actually very smart and reliable he originally joined the auctions in hope of finding information on his friends death and has a strong sense of justice even though he protects the auctions

Retrieved from "https://voltage-inc.fandom.com/wiki/Mamoru_Kishi?oldid=49527"
Community content is available under CC-BY-SA unless otherwise noted.