Voltage Inc Wiki
Register
Don't have an account?
Sign In
Advertisement
in: Metro PD: Close to You, Games, Hiroshi Kirisawa,
and 9 more

Metro PD: Close to You

Metro PD: Close to You is an otome game by Voltage Inc. In it, you are a detective who falls in love with one of your colleagues at the Metropolitan Police Department.

The game is currently available on iOS and Android.

As a detective in the Community Safety Unit of the West Arai Police Department, you spend most of your time on small cases. Looking for lost children or helping residents deflect the interest of a peeping Tom is about as exciting as it gets… until the day a man you’ve never seen before informs you that you’re being transferred to the Metropolitan Police Department. Suddenly, you find yourself working complex and dangerous cases alongside the gorgeous guys of the 2nd Unit, and between the crimes and your co-workers your pulse barely has time to slow down. However, it takes more than a pretty face to throw you off your game, and you’re determined to show the MPD what you’re made of! 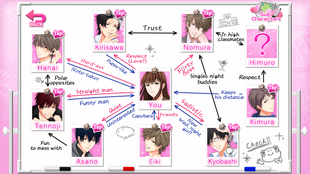 As you are discussing cases with some locals, a man breezes by your desk and happily informs you that you are being transferred to the MPD 2nd Unit effective immediately. Oblivious to your shock, he introduces himself as Tadanobu Nomura and tells you to remember his name before leaving as quickly as he appeared.

The next day, you show up for work at the MPD’s headquarters. While mustering your courage to actually enter the building, you happen to run into Kazusa Hanai. Hanai mistakes you for a tourist and quickly rattles off directions to several area attractions before telling you not to loiter and heading into the building. Hanai’s dismissive attitude riles you up, and you head into the lobby with newfound determination.

While making your way through the lobby, you literally bump into Shusuke Asano. You attempt to apologize to him, but he appears to be asleep on his feet and is too dazed to even acknowledge you. Just as he starts to come around he is greeted by Eiki Yachigusa, who then enthusiastically greets you and proceeds to tell you that you resemble a capybara. As Eiki tries to convince you that you do, in fact, look just like a capybara, Katsuyuki Kyobashi happens to walk by. Kyobashi tells Eiki and Asano that they’re going to be late, pronounces you a “four,” and walks off, followed by Eiki and Asano.

Feeling annoyed by the strange morning you’re having, you make your way into an elevator. You select your floor and press the button to close the elevator doors, but you manage to accidentally close them on Yutaka Tennoji. Tennoji is confrontational and accuses you of having no manners, but his attitude changes completely when he checks his phone and sees that his favorite baseball team won their game. Bemused, you watch the now-happy Tennoji as he gets off the elevator on the same floor you now work on.

Carefully following the signs, you eventually find your way to the Special Investigations 2nd Unit office… but not before you encounter three rather unpleasant 1st Unit detectives. Frustrated by their dismissive attitude, you begin to open the door to the 2nd Unit area, only to have Hiroshi Kirisawa open it from the other side and hit you squarely in the forehead. Kirisawa apologizes before introducing you to the others, and you’re shocked to see that all the men you ran into earlier are in fact your fellow 2nd Unit detectives.

Introductions are barely over before the 2nd Unit is called on to investigate a bomb threat. Once you arrive at the scene, Kirisawa orders you to stay behind to work with the officers who are on their way to provide backup. However, almost immediately after the others disperse you are attacked, tied up, and dragged off by the suspect. The suspect shoves you into a warehouse and sets off a time bomb, but you don’t have time to do anything before the bomb explodes.

Somehow, you manage to survive the explosion. You hurt all over, but as you regain consciousness it doesn’t take long for you to realize you’re being closely held in someone’s arms…