A Sudden Kiss of Oath

My Forged Wedding is an otome game by Voltage Inc which is the most popular of early Voltage games. You move to Tokyo in hopes to finding a better job, and your uncle agrees to help but first you must help one of his friends which is to pretend to be his fiancée for one month.

It is available on Android and iOS.

A social media version of the game, titled My Forged Wedding: PARTY, is also available on Android and iOS. This version also has slightly altared plotlines - ex. in the prologue, you arrive at the bar to introduce your fiancee, Makoto Igarashi, to your parents, but you receive a letter saying that the engagement is called off. The way the target characters get involved in your situation will vary as well as the role of the ex-fiancee.

After graduating from university you move out from your hometown where hopefully you can find a job. Your uncle says he's got a job for you, unbeknownst to you he means marriage. This "marriage" is supposedly to help his fellow friends with a problem they have. 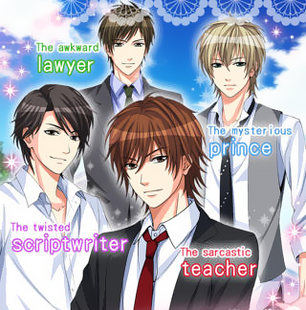 The game starts off with you arriving in another part of Japan from Kyushu to get work with the help of Kunihiko, your uncle. After you get out of the station, you call Kunihiko and he tells you to pick up some supplies from a supermarket that you've never heard of. When you get there, you have a hard time finding the ingredients until Yamato helps you.

When traveling down the road, you see Ren looking into a bridal shop and wonder who his fiancee is. As you arrive at the address Kunihiko gave you, you meet Yuta who says that you are indeed at the right place. Once you enter, you think that you'll be undergoing a job interview after seeing the six men there (two of which had arrived shortly after you). Kunihiko then asks you to help one of the six men with a problem.

Retrieved from "https://voltage-inc.fandom.com/wiki/My_Forged_Wedding/Novel?oldid=52531"
Community content is available under CC-BY-SA unless otherwise noted.