Voltage Inc Wiki
Register
Don't have an account?
Sign In
Advertisement
in: Article Stub, Kissed by the Baddest Bidder, Ota Kisaki,
and 8 more

Ota Kisaki is the youngest selectable bidder in game Kissed by the Baddest Bidder.

Ota is the son of Ranko Kisaki, a famous pianist, and her husband Toru Kisaki, an architect. When he was in elementary school, he'd painted the cherry blossom at his school yellow just for his own enjoyment. Most of the adults were mad at such a stunt, except his art teacher Doi. Doi was an eccentric artist who never taught him anything, but he really respected him and that's when he decided to become an artist.

When he was 14, he won his first art competition and got his big break as an artist. He learned everything about how to deal with the media and sponsors through his art teacher Doi who was already a famous artist. When he was 18, he moved out to study art abroad because he couldn't take his mother's meddling.

By the time he was 20, he was very well-known in the art word and been working on various projects for the Olympics. But then Doi stole one of his art pieces, publicly claimed it as his work, and when he tried to defend that it was his, the media backlashed against him. He went to New York City until the fuss died down and around that time, he met Baba, who was a fan of his work and then introduce him to black market auctions. Since his mentor betrayed him, he's never gone to see him and lost trust in people. Since the incident, he developed the persona, "The Angelic Artist", as a way to repair his reputation and career. He'd also became a sponsor for the black market auctions, and would appraise the artwork that Baba would steal and also create his disguises. He really had no connection to the auctions other than a way to kill time and not be bored.

When you stumbled to the auction and you chose him to be your buyer, he found you interesting and decided to keep you as a "pet".

After he marries you, he has a daughter named Hinata. 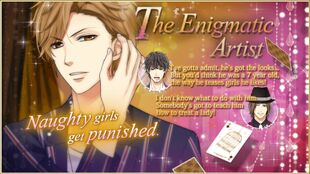 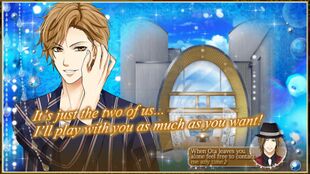 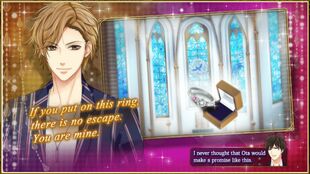 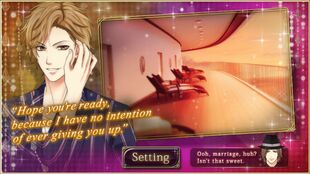 Ota has wavy and messy brownish-orange hair that's parted on his left and amber eyes.

He is cunning and sadistic and gets along well with Baba. He often pretends to be the "Angelic Artist" the media believes him to be in order to avoid attachments from developing, as he's afraid he'll be betrayed and have his feelings hurt once more. While Ota may seem like an unlikeable person at first, he is actually very passionate about his work and can be considerate of other people's feelings. He always treats you as his previous dog "Koro" and never calls you by your first name