Voltage Inc Wiki
Register
Don't have an account?
Sign In
Advertisement
in: Article Stub, Enchanted in the Moonlight, Shinra,
and 5 more

Shinra is a selectable ayakashi from the game Enchanted in the Moonlight.

Shinra and his older brother Taira are presumably the sons of the previous head of the Oni Clan, and Taira was to be the next clan head since he was the firstborn son. As a child, he envied Taira and used that as a motivation to get stronger, but he always loved and respected his brother. He got into some altercation with an ayakashi and his brother saved him, but it ended up costing him powers and was forced into live as a human in the human world; Because of that, Shinra was then choosen as the clan head but he felt guilty for being the reason that Taira lost his powers and position to be clan head.

Shinra was then enrolled at the Ayakashi Gakuin where he possibly met and befriended Miyabi, Chikage, Kyoga, Yukinojo, and Samon.

He met you a long time ago when you were a child. He had gone to the human world to practice his summoning of thunder in order to surpass Taira at something. Unbeknownst to him, you were in that field crying and scared and so he made up that charm on your palm to calm you. Because of their reputation, oni aren't used to gratitude but you thanked him and he never forgot that. Although you didn't know it was Shinra at the time, he was your first crush.

What You Should Know About Him 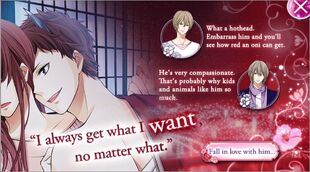 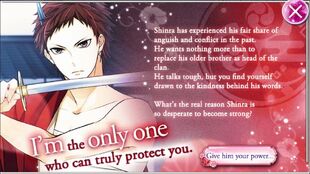 Shinra has short and spiky red hair, light brownish-red eyes, and an earring on his left ear.

Shinra is the youngest member of the ayakashi clan heads and often gets teased by the other guys, especially Miyabi who often calls him a little oni. That and because he easily gets riled up.

He acts tough but he's very compassionate. Kids are naturally drawn to him and although he "claims" to be annoyed by that, he likes them. He also tends to blush very easily around you. It's somehow natural for him to become shy yet stay the same way he acts while around you, but even so Shinra seems to keep his distance from you at times and leave you alone when you want to be alone.