View source
watch 01:36
We're Getting Mutants in the MCU - The Loop
Do you like this video?
Play Sound

The Star Prince who Fell in Love

Star-Crossed Myth is an otome game made by Voltage Inc. You are the reincarnation of a goddess and you fall in love with a god who you must help absolve his sin, but he commits another sin by falling in love with you.

It is currently available on iOSand Android.

“What happens when you wish upon a star?” In the night sky full of stars -farther than the eye can see, one beautiful shooting star suddenly appears before you...the heavens have something amazing in store for you.

The shooting star turns out to be a group of beautiful gods from the heavens. As gods, they should have everything. Hence, what they do not possess and truly need...is your love. 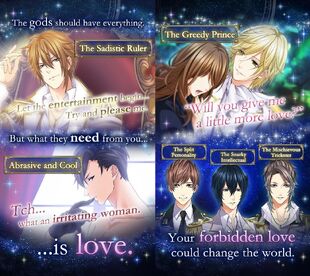 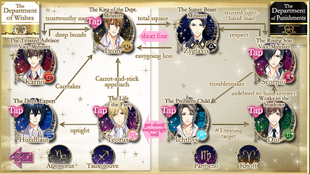 The story begins the evening of July 6th, the day before the Star Festival is held at the planetarium you work at. You wish that the skies will be clear up for the Star Festival, but as you do so, you notice something glowing outside your window. Thinking that it's a shooting star, you run out onto the balcony, but don't see anything out of the ordinary. You notice a big light that seems to be heading straight for you. Out of shock, you shut your eyes until you're hit with the light and your vision goes white.

You suddenly open your eyes. Thinking that it was just a dream, you are relieved, until you notice six strange men wearing strange clothing, surrounding you. The men start talking about being exiled by the king, in which you have no clue as to what they're talking about. Three of them, Dui and Ichthys leave, chasing after Scorpio when he leaves after complaining that your apartment is a hovel and claiming that he hates humans. These three have black armbands.The remaining men with the white armbands, Huedhaut, Teorus, and Leon begin talking amongst themselves until they all look in your eyes and say that "you have stars in your eyes." They tell you that they are Gods, also known as the Princes of the Stars.

Teorus, Huedhaut, and Leon tell you that you have to come with them, because it's your destiny - which leaves you utterly confused. You keep threatening to call the police, saying that the "Princes of the Stars" is just a hoax, until the men tell you that they are there because you made a wish, even though you just said it in your head. Becoming fed up with you refusing to believe that they are gods, Leon snaps fingers and transports you in the air, floating. You are so far up from the city lights in Tokyo that you can clearly see the beautifully shining stars. He then drops you, leaving you falling towards the ground. Leon tells you that you'll meet him again and to remember his name.

You wake up again with a start, thinking that everything was a dream. You see a meteor light on the news in a neighborhood that vaguely looks like yours, but you shake this off, reminding yourself that it's the day of the Star Festival and that you have to go to work. When you arrive at the planetarium, you go to straight to work. Your passion for the stars is so evident that your friend, Hiyori, even makes a comment on it.

When you are outside on the top floor of the planetarium, hanging up people's wishes to be granted, Dui suddenly appears along with Scorpio and Ichthys. Because of how attractive they are, along with them wearing what seem to be costumes to the humans, other people on the planetarium think that everything going on is a play and that it's part of the Star Festival event. The rest of the six men show up and begin to try and woo you and try to get you to go with them. You have no clue what they're doing and just want them to leave you alone.

Suddenly a little boy falls off the building when he gets knocked off by the wind. Surprised, and not wanting the boy to fall, you try and grab the little boy's hand, but end up falling off the building too. As your falling, you remember Leon's words about believing in the gods of the stars.

The game begins when you believe and say "God... save me!"

You and Hiyori are leaving the planetarium and walking home in the rain. It had been raining nonstop for a while and the two of you are worried that the observation event may get cancelled. As you went your way, a speeding car was heading toward you and you managed to get out of its way at the last second. The ordeal scared you but you felt that the driver didn't see you and you go home.

Back at your apartment, you make a teru teru bozu and wish for the skies to clear on the day of the event. You hope that the Wish Department got your wish and your mind goes to the six gods; they've been busy since their sins have been absolved and you haven't seen them lately. You then think that Leon will laugh at your childish superstition doll, but you still hope that the gods will grant you wish.

Your wish came true the next morning and you are in a happy mood. Today is your day off so you spend the whole day shopping for yourself. As you walk back home, you gaze at the stars and wish for another sunny day, but then two strange men with tribal tattoos on their face approach you. They say to you that it's no use running and call you "goddess of fate", and then you are enveloped by a white ball of light. You then see Karno and Zyglavis protecting you from the men. The men call themselves Crow and Servillah and retreat after the appearance of the two gods.

As the three of you enter the parlor room, you see the six gods arguing with men you've never seen before, and you realize that they are wearing the same uniforms from the Department of Wishes and Department of Punishments. An irritated Leon tells Partheno to go back to the Heavens, and an angry Scorpio tries to make Aigonorus move from the couch, but he's dead asleep. Leon demands Karno to explain all this and Zyglavis comments to Leon that he's impatient as ever. Partheno takes notice of you and he teasing flirts with you and Ichthys warns you that he could take advantage to you if you get too close, which spooks you. Teorus tries to wake Aigonorus again, but to no avail.

Karno then starts the introduction of the other gods in the Wish Department. Tauxolouve introduces himself and asks you to call him "Lou" since his name is a mouthful, and you notice that there's an mature allure about him. Teorus teasingly asks you if Lou is making your heart pound and Leon quips that you wish to become a god's plaything. Lou flirtingly says that he'll gladly grant that wish. Aigonorus is then awaken by Karno and asks who you are, which Huedhart explains that you are the former goddess who erased their sins. He nods unenthusiastically, which you can't tell if he's interested or bored. Zyglavis then starts the introductions of the other gods in the Punishment Department. Partheno introduces himself and claims that you are a thing of true beauty like him, which makes your heart skip. Lastly, Zyglavis introduces Krioff who's stern expression scares you a little, but Dui explains that he's a kindhearted god. Krioff apologizes for scaring you for he was distracted by the stars in your eyes.

Leon then demands why the other gods are here, and they explain that are here on orders from the King to protect you and prevent the King of Hell from resurrecting. They also state that they'll will be living in the mansion as well which infuriates Leon but then perks up when Karno explains that if the Wish gods are here, he wouldn't have to keep traveling back and forth. Scorpio is less than pleased with the Wish gods being here, but doesn't mind the Punishment gods being here; he's also grateful the Zyglavis will be here to help him, but Zyglavis states that he won't be able to. Ichthys then brings up if you'll be moving into the mansion, which leaves you flustered. Leon then states that he's not going to put your life in their hands and the mood becomes tense. Huedhaut, Teorus, Dui, and Scorpio offers to protect you for the more guardians the better, but Ichthys calls them out for really wanting to get close to you. Then the formerly sinned gods argue with the others on who's room you should stay at and who would protect you better.

Krioff then mentions reward, much to Zyglavis' displeasure. Karno explains that the King promised a reward on the god who protects you, and Zyglavis states that the reward is unnecessary but the King insisted. You are disheartened that the gods are only protecting you for the sake of a reward, but Partheno assures you that they'll protect you reward or no. Leon is intrigue by the prospect but they are soon interrupted by Vega and Altair, who informs them that the King has ordered the formerly sinned six gods to return to the heavens and investigate the King of Hell. Before leaving, Leon warns the gods that if anything happens to you, he'll never forgive them.

Once the six gods leave, the game begins with you choosing which god you want to protect you.

Characters/titles in bold are only available in the Japanese app and have yet to be translated.