True Love Is From Sweet Lies

True Love Sweet Lies is an otome game by Voltage Inc. It is one of the seven games where police involvement is a major plot to the story. Yet again, the law and enforcement are tasked to protect you.

This game was once a standalone app but since the introduction of Love 365: Find Your Story, the app was moved there along with preexisting standalone apps.

An unplanned involvement with criminals gets you a law enforcement officer under your protection. 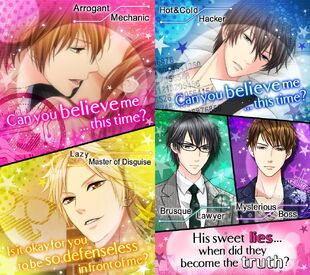 The game starts off with you at a city intersection admiring the top news story of the day displayed across the jumbotron: your photo of a secret meeting between the Former Prime Minister and the Chief Cabinet Secretary. Ecstatic to see your photo on the front page of the morning paper, you suddenly receive a mysterious text from an unknown number saying, "Hand over the photo data from the secret meeting." Amidst your confusion, you realize you're late for your meeting with Kakura, the editor of the Life & Style department.

As you are waiting in the elevator, you meet a man (who turns out to be Rui Wakaba) as he calls out for you to hold the elevator. You mention he smells amazing and is very handsome when he smiles at you. You suddenly realize you've seen him before and soon figure out who he is.

Still in a daze over meeting Rui; you head over to the meeting room and are greeted by Kakura. You're told to go to conference room 503 to wait. In the meeting room, you are greeted by an unknown man wearing a black suit. He introduces himself as 'Kurokawa'. He asks you to hand over the photo data in exchange for $500,000. Unsure as to what to do, you ask for a little more time to decide and this aggravates the man, thinking $500,000 isn't a sufficient amount for you. He offers one million dollars for the data in hopes of a tame exchange. Another man, Kiyoharu Nanahoshi disguised as Mister Ueda, suddenly enters the room, asking Kurokawa what business he has with you. You explain to him that Kurokawa attempted to 'negotiate' an exchange for the data, to which Kiyoharu replies by saying his 'company' has already bought the right to the photos. Kurokawa leaves after being warned by Kiyoharu who introduces himself to you as 'Mister Ueda' from a local news department. After thanking you for your photos, you mention he's really hot and scold yourself for missing out on an opportunity to exchange business cards.

After your meeting, you receive a call, but you're unable to answer as a 'Scary Man' (Naomasa Sakura) bumps into you; causing the contents of your purse to spill out. As you try to pick up your belongings, which have become mixed with his, you notice you have picked up the wrong items. Noticing the man has your pen case, you try to call out to him but he denies it. 'Mister Ueda' appears asking if something is wrong to which you reply by telling him the 'Scary Man' has picked up your pen case instead of his own. 'Mister Ueda' offers to get your pen case back while you continue picking up your belongings. You thank him and mention it's the 'second time he's saved you' to which 'Mister Ueda' replies with, "Maybe it's destiny?" Believing his words, you aks if perhaps it's love. Realizing you've spoken your thoughts out loud, you quickly cover up by thanking 'Mister Ueda' for saving you by saying you'd like to do something for him. 'Mister Ueda' asks if you would like to keep him company, which you mistaken as a date.

The two of you go to a bar and you finally realize he was simply asking you to accompany him while drinking. Unfamiliar with cocktails, 'Mister Ueda' asks the bartender (Sakuya Nanahoshi in disguise) for a sweet, weak drink. You chug the drink down, saying it's really sweet and doesn't taste like alcohol at all which surprises the two. After drinking for a while, 'Mister Ueda' mentions you've already had five drinks and offers you his shoulder to lean on as he thinks you're drunk or somewhat intoxicated. As his face draws near, he asks you if you're coming onto him and asks you to close your eyes. You allow 'Mister Ueda' to kiss you but before you can progress any further, your phone vibrates. As you reach for it, you accidentally whack 'Mister Ueda' across the face. Apologetic, you leave to answer your call.

After your call, you notice 'Mister Ueda' and the bartender conversing in secret. Curious, you follow them through the emergency exit and listen in on their conversation.

You overhear the two discussing the data and you hear them mentioning drugging your drinks with sleeping pills. You soon notice there are more people than you thought, including Rui Wakaba and the 'Scary Man.' As they argue amongst themselves about who is to blame for the slow progress, 'Mister Ueda' finally says he will take you to a hotel where he plans to take your SD card. Furious by what you've heard, you become enraged and interrupt the conversation.

You storm off after punching 'Mister Ueda' in the face. On the streets, you're suddenly confronted by Kurokawa who abducts you and drugs you. When you awaken; you find yourself tied up in an abandoned warehouse and with Kurokawa and his goons. Still insistent on getting your SD card, Kurokawa tries to negotiate with you. At a loss, you tell him where the SD card is. After taking it, Kurokawa holds a gun to your forehead, threatening to shoot you and says he never intended to let you go alive. Before he can pull the trigger, however, a motorcycle crashes through the window and Kiyoharu and Sakuya appears.

They clear out the goons and Kurokawa and then they confront you; demanding you hand over the SD card. You tell them that it's in the goon's front pocket and after they retrieved it, the two begin to leave. After joking about leaving you alone in the warehouse, you return to Fuse Investigations with Kiyoharu and Sakuya.

You're taken inside to meet 'the boss man', Nozomu Fuse, whom you mistook as a Yakuza boss. You're once again in the company of all the men you met during the day. They explain to you that your life is in danger because of your photograph which has angered the Underground Tokyo and Mafia. They promise to get rid of all your persecutors within three months if you agree to give them the SD card after. You agree and you're then told you must live at Fuse Investigations for the time being, as your apartment has already been raided and it'd be too dangerous for you to be alone. You're then asked to choose a person to share a room with.

Bold text means that the stories are still in Japanese and has yet to be translated.

Retrieved from "https://voltage-inc.fandom.com/wiki/True_Love_Sweet_Lies?oldid=52636"
Community content is available under CC-BY-SA unless otherwise noted.