Wanted: Romance Renegades is an otome game by Voltage Inc. and is currently only available in Japanese. Coming in April

You have been framed! No one believes you except for one...

It is available on Android and iPhone.

You were an ordinary bank worker until one day you were framed for embezzlement. You lost your job, friends and family but there is one person who believes you.[1] 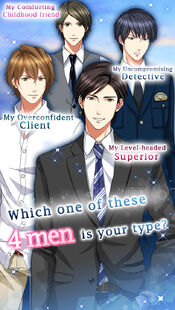 The game opens with you being locked inside a dark room with the branch manager calling the police.

You were in charge of Masaki's business which means that you and your boss - Mikiya Takajo are invitees to the company's one hundredth anniversary celebration! The two of you were enjoying yourselves, and then you spot someone playing the piano. You realize that that person is your ex-boyfriend, Shinji Ayano.

Then someone bumps into you, accidentally spilling their food onto you. You leave for the restroom to clean it up. On your way there, you end up bumping into your ex-boyfriend and although you greeted each other you felt awkward and decided to leave.

As you walk back to the reception hall you see a door, similar to the one at the reception hall and enter it. This room is full of portraits and you wonder if Yunosuke's portrait is here too. Suddenly, two men in suits come in and you instinctively hide. They chat a little and leave the room, as you try to leave a man grabs your arm. But then he falls and when you turn around, there is a man there, clenching his fist. You see a police badge and notebook on the ground and pick it up. The man, Keigo Kurata, takes them from you and walks off. You chase after him, asking him what a police office is doing here but he leaves without a single word.

You return home after the party but you feel as if someone is stalking you. However, the next day, you go to work like normal when Yunosuke comes up to you and said that he wants to talk about you and Mikiya.

He then takes out ring box and says that he is going to propose to you. This causes you to get flustered, he then tells you that it's just a joke and that he wanted to put this ring box in a safe deposit box. You help him do so.

Later, your branch manager calls you into his office and asks for an explanation on why Yunosuke's safe deposit box is completely empty. Mikiya and Yunosuke are there, Mikiya tries to defend you while Yunosuke doesn't say anything.

Then, your branch manager orders security to put in you a dark room. While in the dark room you overhear that the branch manager will be calling the police and you're unsure of what to do. Suddenly, someone enters the room and tells you that you're going to get out of here.

Mikiya is your 37 year old boss, the section manager of general affairs department of the Yotsuba Bank.

Yunosuke is the 25 year old soon to be successor of the Masaki commercial company. A company that is aiming for global business. Despite being the victim, he believes in you.

The 35 year old detective from the Second Investigation Division and is in charge of your case. He appears to have doubts in the headquarters policies.

Shinji, 29, is your high school classmate as well as your ex-boyfriend who broke up with you three years ago without an explanation and now he is protecting you - this time with a deep reason.

Retrieved from "https://voltage-inc.fandom.com/wiki/Wanted:_Romance_Renegades?oldid=52064"
Community content is available under CC-BY-SA unless otherwise noted.