Yamato Kougami is a selectable character in the game My Forged Wedding.

Yamato was raised by his mother, whom he loved dearly, but never knew his father. He grew up with the LI crew and played baseball together. He was best friends with Tamaki, who was also his nemesis, but they had a falling out and hasn't seen him since. His mother had a weak immune system was often sick a lot, later passed away. Yamato then researched the whereabouts of his biological father and believed that he's working at a prestigious all girls school. He becomes a teacher and is able to get into the school, but he has to be married for the school doesn't allow unmarried male teachers to work there.

Yamato has neck-length, layered auburn hair, and dark brown eyes. He has a beauty mark on the lower, left side of his back.

Yamato is immature and cocky, and often teases you by calling you "Pouty". He is aware of his handsome features because he points out that if he wanted to, he could get any woman he wanted.

Though he may seem unpleasant and at times kind of rude, he is compassionate and caring which is shown when he's interacting with his students. He is also very forgiving, as shown when one of his students who loved him tried to not only harm you but also "break" your marriage. He also has a strong moral code for he will never pursue a romantic relationship with one of his students; most likely because of what happened to his mother for she was a student who was pregnant by her teacher and had to raise him by herself.

Because his mother often worked a lot, Yamato would often cook so he became a good cook and is quite proud of his talent, one instance was when Ren ate broccoli in the New Years sub story, he claimed Ren ate it because he cooked it when really Ren was distracted by his thoughts on you.

He loves electronics and appliances, and considers his Roomba a "pet".

Yamato Kougami is a selectable character in the game My Wedding and 7 Rings.

Yamato was raised by his mother and didn't know who his father was. He also knew the Sanno CEO for he would help him and his mother out.

He and Ren befriended you when you were in high school and was a grade above you. When you parents died, he and Ren supported you through those tough times and you've three been friends ever since.

Presumably, he went to college and then got a job in the Sanno Corporation in the Education Group.

Upon the Sanno's CEO death, he was promoted to the Special Executive of the Education Group and learned that with the position, he becomes a marriage candidate for you and asks you to choose him so that he can protect you from the other Special Executives. 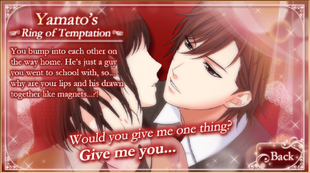 Yamato has auburn hair, which is slightly shorter than in MFW, and slender brown eyes.

Yamato's cockiness has toned down, compared to Asahi and the two often butt heads because of their strong personalities. He is dedicated to his work, for he wants to build a strong education system for places that have very limited education, like in Africa.

He often teases you a lot, often calling you a glutton, but he's fiercely protective of you. This is evident that he tried to find a way out of your contract when you chose him and was distrustful of the other executives, except Ren.

Retrieved from "https://voltage-inc.fandom.com/wiki/Yamato_Kougami?oldid=47078"
Community content is available under CC-BY-SA unless otherwise noted.